Note: this post contains some mild movie spoilers, but nothing not already evident from previews.

I really love seeing movies in this city. I often see American movies, so perhaps my movie-going frequency is large part due to the fact that for two hours, I’m in a secure little English speaking bubble, some semblance of home away from home.

This past weekend, I saw The Beaver, Hangover II and gave Midnight in Paris another shot. It’s strange, even though I had my problems with Midnight in Paris the first go around, I just felt like I needed to see it again. There were two things I connected with in the movie. First a note on nostalgia. It’s too easy to believe that our time is the most treacherous, everything is uncertain and time moves so fast because of this that and the other. We are a people are obsessed with time saving techniques, yet plop ourselves down in front of glowing rectangles and let the hours pass by. I like the time we live in, women are liberated, whooping cough is eradicated (in my western bubble at least), and we have so much access to information on the world we live in.

Also in Midnight in Paris, I really connected with the magic that happens in Paris after midnight. Take a walk in this city, and you won’t be literally transported back in time, but everything about harks back to an earlier time. Paname is a work of art, and today she holds beauty from a conglomerate of different times. Paris has a, well, je ne sais quoi. I know its a bit cliché, but I really love this ipad advert wrapped around one of the oldest buildings in Paris (on the Île de la Cité). 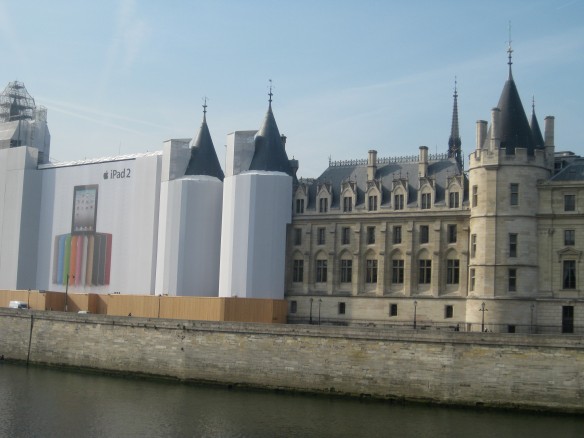 Hangover II was totally null. The jokes were exactly the same as the first one, I mean exactly. Sequels exploit the essence of the first movie. I liked The Beaver, though I also had my problems with it. I thought the characters were complete, like there were no details that existed outside of the movie. It’s a depressing comedy of sort, but I’d recommend it.

On another note – I’m leaving for the U.S. in two weeks. I’m definitely sad to leave, but any sadness about leaving is overshadowed by a need to be home.

I know, I know its been a long time.

I’m not really sure why I stopped posting. Perhaps a part of it was that I felt like I’ve lost my muse. Not to say I’ve found it again, but perhaps I can make do without.

Just as a brief update, I’ve finished my teaching contract and now occupy myself with my various tutorings and online gigs and reading and writing. Between that and enjoying the outdoors, I find my time is well taken. 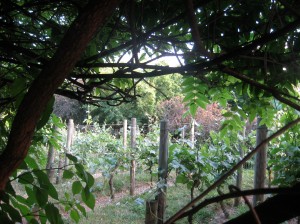 the petit vineyard in the Parc de Belleville

I saw Woody Allen’s new movie “Midnight in Paris” the other day, and although I wasn’t sure how I felt about the movie, it’s one that stayed with me. The movie is sort of all over the place – not in plot but in worth. Sometimes the movie is laugh out loud funny, and I quite like the overlying concept of the movie. But, there are other parts that made me angry at its ridiculousness. I won’t spoil it (especially because I don’t think its come out in the States yet), but lets just say that the character meets a really famous American author. This author lived in Paris back in the day, and he’s a total ass and a drunk. But, you can’t not adore him. This character was, in my opinion, so poorly depicted that it made me fidget in my seat I was so mad. 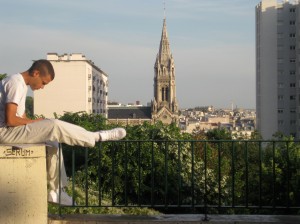 view from the Parc de Belleville

But, the part that stayed with me was this overarching concept of Paris. What Paris is, how we as Americans (and perhaps all étrangers) see Paris. We come here with, as the French would say, moons in our eyes. We can’t see Paris for what she really is, rather with an aura or glow. The b&@* at the boulangerie can dim this glow, but its easily regenerated by a midnight walk around Paris. I’ve said it before: there’s just something to this city.

view from the Parc de Belleville

I’m planning on going back to the States on June 16th – and I’m definitely feeling like time is dwindling fast. On one hand, I’m really ready to go back and be home – albeit for only 6 days. On the other hand, I’m leaving Paris.

I know, I know. This post is long overdue.

I’ve been busy at a variety of jobs, on top of teaching English at public schools in Saint Ouen (3 schools, 12 classes,  250 students), I also babysitt, tutor and have a variety of online jobs.

The teaching gig is going great. According to the program I’m supposed to be an Assistant Teacher (key word “assistant”), but in actuality I’m really the teacher for the full seance, 45 minutes. I get guidance in a few classes, but for the most part I design the lesson plans myself. I’ve done the Hokey Pokey, Head Shoulders Knees and Toes and sang Wish You a Merry Christmas, Old McDonald more times than I can count. I also created a Bingo with colors board (the kids call it the “lotto,” because Bingo doesn’t really exist here, but its the same basic rules as the lotto).

I printed out 7 large and colorful pictures of animals, and I use them to teach the question/answer “What’s this?” “It’s a cow.”  I taught the verb “to have,” i.e. “I have a pig. I don’t have a pig.” showing and hiding the picture of the pig. Now I’m starting to teach the verb “to be,” I ask one student to mimic an animal, and his/her comrades ask “Are you a bird?” paired with the response “Yes, I am a bird.” or “No, I am not a bird.”

I’ve gotten ideas from fellow teaching assistants, teachers at the school, and sometimes even the kids themselves. See, any language is difficult to perfect. English is difficult in her vocabulary, we’ve adapted around cultures. We’ve taken words from all different languages, and even created some on our own. French, on the otherhand, is an homage to the past. New words are fought, deemed as a degradation to this lovely language.

So, the façon in which French is taught is totally different. Orthography is taught with rigor. Its not just the spelling of the language, (which, oy, is it complicated) but also handwriting skills. A beautiful language is worthy of beautiful script.

It can all be seen as a mere annoyance, and unwillingness to relax the bar. It means that the French are uncompromising, and that’s not always a bad thing. Sure, it means that that petty fights are neverending, but it also means that quality remains in tact. It means that everything around us is kept beautiful for nothing but the sake of the aesthetic pleasure itself. It means that food is supposed to be delicious, savory, and savored.

Of course, this also means that the grammar, spelling, and dictation drills are numerous and tedious at times. This is accommodated by a singular method. Sure, there is a basic curriculum, but also there is a uniform way to write and underline the date in red or how to mark a line break in blue. Or how I write something on the board, they copy it down, and then bring it to me to be checked.

My personal memories of 3rd grade is faded, but I am sure that individual teachers had their own manner, their own pattern throughout the course of the day. But this isn’t just one teacher, its uniform across all the schools, across all of the departments of France.

Its amazing how people shape a language, and then language serves to shape the people.

Sometimes its the kids that give me the best ideas. They have an excellent concept of how they can best learn. The teachers, of course, also had a concept of how the kids can learn, but their concept is conscious. The kids are unaware that they know how to learn, because its the patterns of which they think. They’re busy using those patterns, not learning and studying them.

So, when a student asked me to conjugate the verb “to have,” a  little lightbulb turned on. I can use these same patterns to teach English. I wrote on the blackboard the conjugation, with the 1st person/2nd person/3rd person singular on one side, and 1st person/2nd person/3rd person plural on the other, just like it is taught for most Latin languages. I asked the kids what they remarked, the differences between French and English, and they immediately were able to identify. 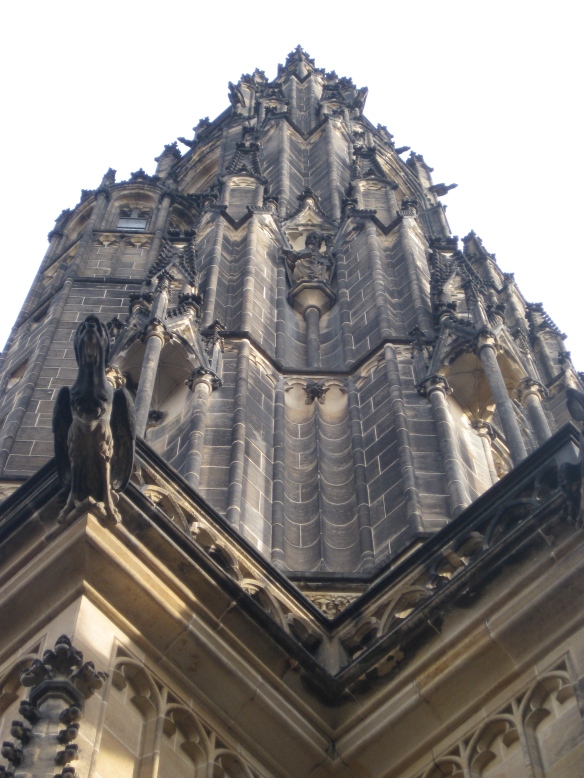 Of course, its not all fun and games. My three schools are ZEP schools, meaning that they are problem schools. There are plenty of kids who are hyperactive, act and cry out, and some that just refuse to learn. I’ve never had an experience with a real class, that was for me to control. It wouldn’t be easy in any language, but its especially difficult to control a class in your second language. Sometimes you’ll see a glimmer in one of these kids, they’ll be the only one that remembers last week’s lesson, but then next week it can be gone.

Anne-lise and I saw the movie Machete last night.

For what it was, it was good. For what it was. We both left talking about other, better, Robert Rodriguez (the director of Machete) movies, and then turned to even better Quentin Tarantino movies. Rodriguez and Tarantino are collaborates on many movies, so its somewhat of a logical step.

The movie takes a flat view of the Texas/Mexican border issue, full of gun-slinging Texas politicians and bouncing Mexican cars. But, it was what it was. I did love the use of new technology in the movie. I often watch old movies, and wonder how different it would be with cell phones, video cameras and the internet, and this movie did an excellent job of integrating the old and new. 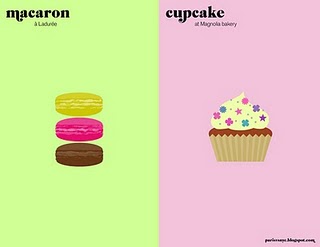 via A Cup of Joe

I have a special visitor here in Paris for my birthday…

These photos were taken via skype w/ mom!

Yesterday Kasey (brother, pictured above) some friends and I went out to a delicious French dinner at A la Biche au Bois. Mmm…I’m still full of salmon with mushroom cream sauce, cheese and l’île flottante…which is basically meringue over custard. Mmmm….I love French food.

Check out my latest Girls Guide to Paris post on the French strikes.

I find it very very hard not to get fat in France. 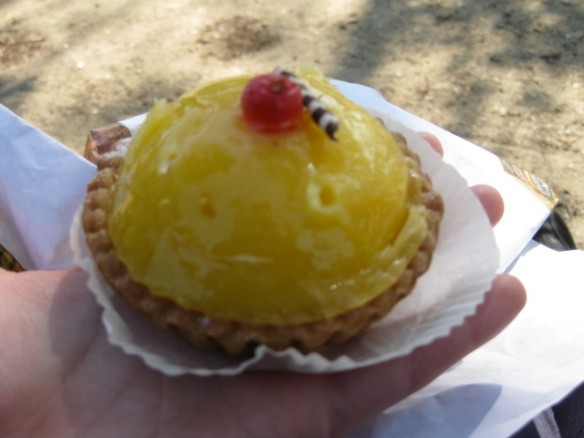 There’s nothing spectacular about the French paradox. The French people just have incredible will power.

Me? I wanto to eat every pastry in this window. In fact, the french idiom for “window shopping” is lèche-vitrine, or window-licking.

pastry w/ dates, in the Marais

Perhaps the French are better able to pass by a pâtisserie because they’re everywhere, all over Paris and all over France. My access has a potential end date.

How many pastries can one eat in a year?

I’m lucky. My new apartment is right next to the promenade plantee. It’s a former railroad track, sort of like the hi-line in New York.

The promenade runs from the Bastille to the Bois de Vincennes. 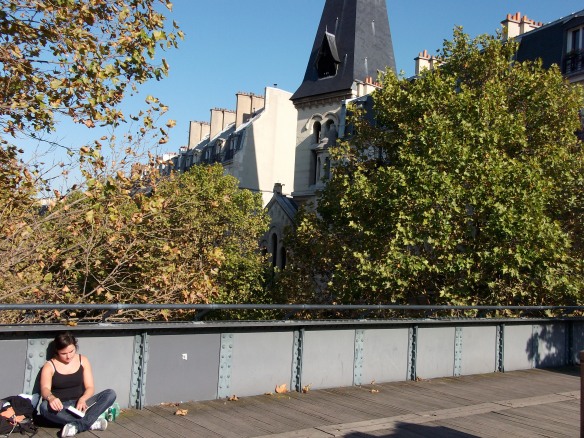 It also cuts through the Jardin de Reuilly, home of the sparkling public water fountain. 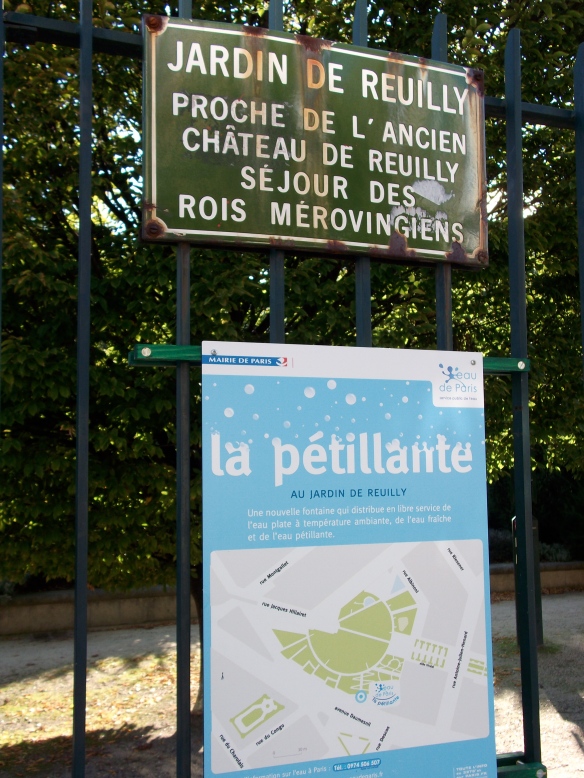 It’s a great running route. Which, is very important to keep off all of those delicious French pastries.